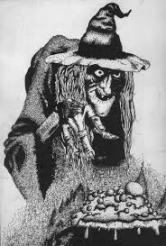 Our first session saw us discuss ‘What is Gothic?’, with each group member offering their ideas on what Gothic means to them, and bringing in just one object to support their view. Objects ranged from vampire fangs and Gothic-inspired tattoos, through to novels such as Dracula.

We also examined three short poems, all with a witch theme. These were:

Robert Frost’s offering, The Witch of Coos’, came out as the group’s favourite, and yet interestingly (we all noted) it was the least ‘witchy’ of the three, at least on the surface. It does, we felt, have several hidden meanings within its composition, not least the links to sexuality, the unknown and assumed knowledge within historical witchcraft.

All three poems have varying levels of Gothic imagery within their narrative, and we were treated to ghosts, skeletons, caves, woods, the haunted attic and a whole host of other  ‘traditional’ symbology – perfect for the lead-up to Halloween.

Our aim is to stimulate debate and discussion over these texts under the Current Reading tab. Please post your thoughts and comments on any of the three texts in whatever shape or form you wish to.

We finished the session by exploring elements of Gothicness and what this would have meant to contemporary audiences, briefly looking at aspects of Dorian Gray, Frankenstein, Dracula and more recent offerings such as Hunger Games, Twilight and Harry Potter. This was stimulated by the newspaper article suggesting that we have nothing to learn by studying ‘fantasy’, and that the Classics should be the order of the day.

Suggestions were made for future reading material and we will be looking at this over the next few days. The next session will be in a fortnight, time and location to be confirmed shortly.

The time for the first session of the Reading Group has changed to a slightly earlier slot, and will now be:

For the first session, we have chosen three poems which, although they all deal with a similar subject matter, approach the topic in very different ways. They also challenge ideas of what makes Gothic literature so that we can discuss what constitutes the concept of ‘Gothic’: Is it to do with the style of writing? Or the subject matter? Perhaps something more fluid? Who defines the ‘Gothic’? And how does that affect how it’s used?

In this vein (pun intended), please bring in a Gothic object to show the group and explain its’ significance and why you feel it embodies ‘Gothicness’. This can be a literary work or a picture or a poster; anything that sparks your imagination.

And so to the texts. They are:

Copies of these poems can be found online very easily, alternatively the University of Hertfordshire library has copies of the Anne Sexton and Robert Frost poems in their anthologies (or your local library is certain to have copy somewhere!).

You may also consider reading ‘The Pauper Witch of Grafton’ also by Robert Frost for another comparison.

And in response to Joanna Trollope’s article in The Times which Matt shared in his previous post, I leave you with this article by Dr Serena Trowbridge on The Independent : http://blogs.independent.co.uk/2013/07/22/from-harry-potter-to-twilight-gothic-literature-in-the-21st-century/

It is rather more positive than Trollope’s analysis as well introducing some Gothic tropes.

A recent article (The Sunday Times, 6th October, 2013, p. 17) claimed ‘Vampires drive stake into Austen’ and suggested that modern students are wasting their time studying fantasy such as Twilight, which offers no moral guidance, shunning the classics as they do so.

The article featured an interview with author Joanna Trollope, who put forward her opinion that ‘fantasy doesn’t really relate to the real world’, further commenting that ‘although fantasy is a lovely escape, I am not sure it’s much help (to children in the modern world)’.

This gives us much cause for debate here at Reading The Gothic, and will form part of our group discussion session on Wednesday 30th October, 2.00-4.00pm (more details here).

Much of our Gothic  literature (many of which are classics, incidentally) is packed full of moral allusions, philosophical debates, science and tantalising ways of viewing the world around us and attempting to understand our place in it. To suggest that offerings such as Twilight are mere ‘fantasy’ is to miss the point – of course vampires aren’t real (sorry people!) but what they are are metaphorical depictions of salient feelings, emotions and struggles that are very real within contemporary society.

For instance, Polidori based his vampire, to an extent, on the greed and debauchery of society, Rymer (and Anne Rice for that matter) on the hopelessness of despair, Le Fanu and Stoker on sexual desires and Meyer used her vampire as a metaphor for troubled or dangerous love.

Beyond this, we have a whole tranche of monstrous beings within Gothic literature – Frankenstein, the werewolf, the mutating Dr. Jekyll or the untainted Dorian Gray – again, metaphors for the difficulties many of us face within life.

Are Austen’s characters any more ‘real’ in the form and function than our ‘fantasy’ characters? Austen herself used the vampiric notion, or to quote Christopher Frayling, the ‘rattling chains’ of the Gothic in her novel Northanger Abbey (1817). True, this parodied the genre as much as Paul Feval’s later novel Le Ville Vampire (Vampire City) of 1875, but to create a popular satire one must ensure the audience fully understands the subject matter.

Studying vampires (or werewolves or any other mythical being for that matter) is only now being accepted as a serious subject, and often grudgingly, and yet the subject itself continues to fascinate its audience as it has done for hundreds of years.

It is the preconceptions of the genre that needs staking, not the genre itself.

The Times subscribers can read the full article here: http://www.thesundaytimes.co.uk/sto/news/uk_news/Arts/article1323884.ece

Vintage Fashion, Hair & Beauty and everything in between!

Reviews, Essays and Analysis of Film and Art By Adam Scovell

An Interdisciplinary Symposium on Representations of Bodies on Screen

Goth with a capital "G"

Home of the darkest thinkers

The Being Non/Human Discussion Group

shifting the shape of popular culture

In the Open Graves, Open Minds Project, we unearthed depictions of the vampire and the undead in literature, art, and other media, before embracing shapeshifters and other supernatural beings and their worlds. OGOM opens up questions concerning genre, gender, hybridity, cultural change, and other realms. The Project extends to all narratives of the fantastic, the folkloric, the fabulous, and the magical.

Home of the darkest thinkers